Things that occupy my mind are perfect material to make art with. It has always been like that. Art is research. I can play with things, order it, try and make sense of it, even if just for a fleeting moment. It takes effort not to ease into a comfortable state of complacency with old, often outdated ideas, views and opinions. It is a continuous process of learning, unlearning and re-learning. I am interested in the lives and activities of men; how society and its structures can shape and define a masculinity that is at the same time attractive and toxic if one considers the recent hashtag hype and similar historical revelations that have created a toxic masculinity that has become a burden to men.

In high school I always chose Greek mythology as a topic for my essays and oral exams, being drawn to the enduring myths of antiquity as storied vehicles to put me in touch with fundamental sources of origin, being, power and truth. To this day it remains an inexhaustible source of ethical enquiry, intellectual speculation and artistic renewal that I regularly revisit with vigour. Hercules, as the divine protector of mankind and the paragon of masculinity, and Darth Vader, as one of the most iconic villains in popular culture and possibly one of the greatest fictional characters ever, have served as the inspiration for GODS, MEN AND MONSTERS.

Under a spell cast by Hera, Hercules is driven to murder his wife and children. To atone for this crime, he is sentenced to perform twelve Labours – feats so difficult, they seem almost impossible. But through his struggles he is elevated as a hero and the embodiment of the Greek concept of pathos. As a reward for his virtuous struggle and suffering, he is promised to live forever with the gods on Mount Olympus.

Anakin Skywalker, once believed to be the Chosen One, succumbs to the forces of darkness and becomes the evil lord, Darth Vader. The conflict between him and his son Luke is a major plot in the Star Wars trilogy and highlights the archetypical Father-Son Conflict and the various ways in which they engage with the shadow aspects of their personalities. 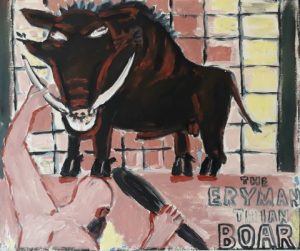